Pioneer are over the moon to have purchased this striking individual by the highly revered Champion National Hunt Sire Flemensfirth out of the Multiple Grade 1 winning mare Petite Parisienne from the Goffs Land Rover Sale. He will go into training at the famed Cullentra House Stables to follow in the footsteps of some of the greatest National Hunt horses of all time.

Our objective going to the 3 day sale with the assistance of Aidan ‘Mouse’ O’Ryan & Gordon Elliott was to purchase a regally bred individual (pedigree at the bottom of the page) with great movement who would also be racey enough to come to hand in time to be capable of competing in the €100k Land Rover Sales Bumper at the Punchestown Festival next Spring. This striking Grey fits the profile to a tee and we have managed to secure him at a fraction of our intended budget.

Flemensfirth has been crowned champion sire on multiple occasions and was Coolmores flagship National Hunt Stallion until his recent retirement. He continues to produce top level National Hunt horses with household names such as Tidal Bay, Flemenstar, Topofthegame, Lostintranslation, Waiting Patiently and possibly the best known of all being his Gold Cup winning son Imperial Commander, the list goes on in which you can view here: https://www.racingpost.com/profile/horse/96578/flemensfirth.

The dam Petite Parisienne was an exceptional racemare competing at the highest level & a multiple Grade 1 winner including wins at the Punchestown Festival and at Leopardstown amassing over €150,000 in prize money through her career. Similar in appearance to our gelding she was described by Willie Mullins as a fantastic mare with a huge engine for her size and a great change of gear. She is by Montmarte who is a popular sire in France and the sire of high class individuals including Cullentra House Cheltenham hero Labaik & the Willie Mullins Graded winner Elimay.

This gelding is very racey in appearance and looks an early type which will give him every chance of competing in the valuable Land Rover Bumper, he also has a lovely attitude to go along with his excellent movement. He is already in the process of being broken in by Ciaran Murphy and his team at his Charlestown Racing base in Mullingar, He has been broken in and is going through the early stages of his development and education, with the plan in time being for him to join Gordon and the team at Cullentra House to continue his education and racing career. This is a tried and tested system which has brought us plenty of success in the past and we are hoping this fellow will tread the same path and get his owners into the winners enclosure like so many of our horses before him.

Aidan O’Ryan – ‘At the price we’ve got him for he’s an absolute steal! Less British buyers were at the sale on day three which has worked in our favour with this one. He’s a nice moving horse who on looks wouldn’t take a long time to come to hand. Profile wise and looks he reminds me of a horse we bought in the past called Kid Commando who had a lovely page, wasn’t overly big at the sales but ended up growing anyway in time, these horses are bred to be champions and at this stage there is no reason to think he cant be. He comes from a good home in John Collins’ Brown Island Stables who we brought Brief Ambition from in the past and they also consigned Petit Mouchoir who won the Land Rover in the past.’

Gordon Elliott – ‘ I’m delighted to have another horse to train for Pioneer Racing, He’s a racey type and is bred to be a very smart horse by Flemensfirth out of mare who was very good for Willie and Gigginstown. We will get him broken in first by Ciaran and then he will have a couple of weeks to freshen up. After that we will look to build him up mentally and physically like all our young horses and all being well the plan will be to work our way to the Land Rover at Punchestown Festival, before kicking on with his jumping career. If he is half as good as the mother we’ll have a lot of fun with him.’ 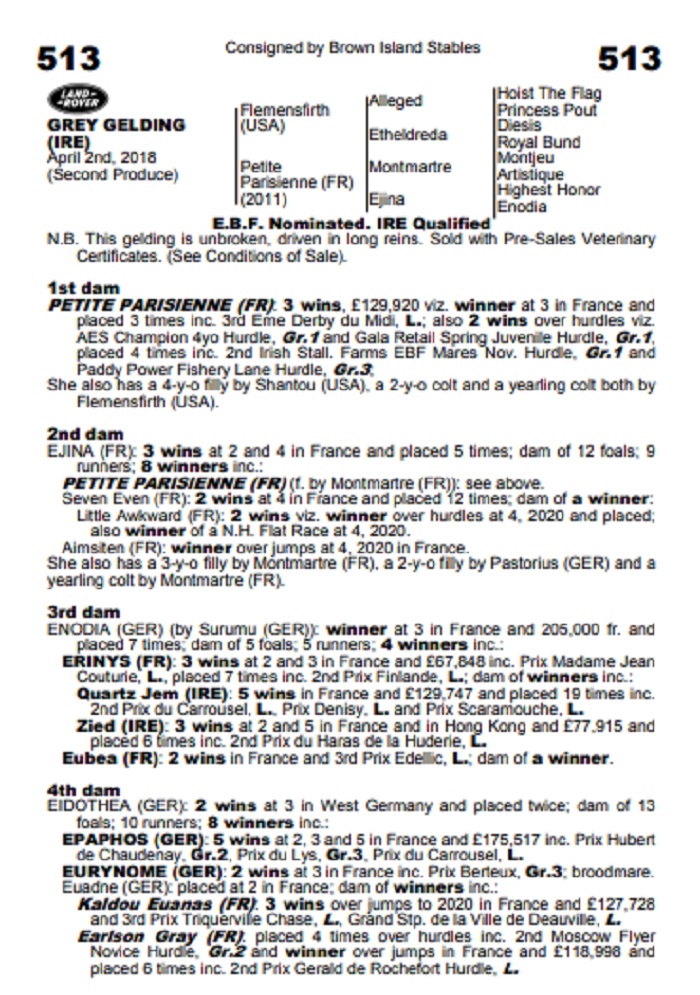