Pioneer are thrilled to have purchased talented & first time 4 year old Irish P2P winner See A Stride who will go into training at Cullentra House Stables.

The first thing that caught our eye was that she is a filly that has gone and beaten the geldings in her point-to-point which is a very hard thing to do and is rarely achieved, a recent example of this happening was Cheltenham Festival heroine Telmesomethinggirl on debut in 2019. The race in previous years also has a good record of producing a nice horse with the roll of honour including black type horses Calino D’Ainy & Born Survivor.

Gordon & Mouse had been to Brian Hamilton’s (her trainer for P2P) yard at the start of the season and this was a horse he put forward as one of his best, so it was not a surprise when she went on and won in fine style rewarding connections brave decision to take on the geldings. What did however come as a surprise was her price tag which they had expected to be considerably more and were at the sales on the day prepared to pay plenty more for her. We feel we have got a real bargain buying this filly and are very excited to see her make her debut in our colours in a bumper when the Winter season begins. This is a filly we expect to take us to big places and is sure to be a big player especially in mares races.

Below you will find reports on her victory:

Tattersalls Cheltenham – ‘A potentially high class mare who has achieved the almost unique feat in recent seasons of beating geldings on debut. Such is the quality of four-year-old maidens in recent seasons that mares rarely take on geldings and it is even rarer to see them come home in front. Add to this that this race was run at a decent gallop and it clocked not only the fastest time of the day but furthermore it was twelve seconds faster than the five-year-old geldings maiden only half an hour later. She has size scope and a lot of courage to battle her way to the front in the closing stages where she was ultimately going clear at the line when others had folded. She is out of a Flemensfirth mare and her dam is a sister to three winners so all the signs point towards this success being a pointer to plenty more to follow and at a high level.’

P2p.ie – ‘SEE A STRIDE (IRE) is clearly a tough performer given the attributes that were required to come to the fore in a race like this, as she came through from a position in mid-pack to win going away at the line. Any mare that can beat geldings at this stage of their career is notable, and she would seem to be a solid staying individual for the future.’

Her dam Steel Glory is a sister to 5 winners in total, 3 under rules including the black type performer According to John (included a 3rd in a RSA and unbeaten as a hurdler), whilst the sire Notnowcato was a good dual-purpose stallion producing the likes of Old Guard and Long Dog in the National Hunt Sphere and of many tough & durable performers on the level.

Gordon Elliott – ‘She’s a gorgeous filly with great movement who’s determination to win reminded us of Mount Ida when she won her Point to Point and we certainly hope she is up to following in her footsteps, we expected to have to give more for her than we did for Mount Ida as not only did she win first time out but against the geldings and in great fashion. She came highly recommended by Jamie Codd, Brian Hamilton her trainer and Richard Pugh who in actual fact recommended Mount Ida to us. She’s one for the winter and our initial plans will be to turn her away for grass and then have her ready to go for the winter in a bumper and kick on from that. She looks like one that should win plenty of races and by being a filly also has the opportunity to run in the mares only races which provide great opportunities for these smart type fillies.’

Aidan ‘Mouse’ O’Ryan – ‘She’s a hard filly who done it in game fashion, she was pulling away from the lot of them at the line, we weren’t leaving without her and expected to give a lot more for the filly than we did, She is a great buy at the price and I’m delighted she is going to a great bunch of owners at Pioneer, you are in flying form at the minute and this girl should give yourselves plenty of big days out.’ 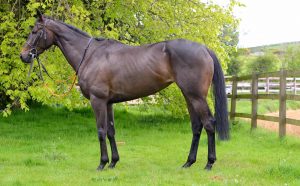 Video below taken just before See A Stride went for her break at grass in May, she is now back in full training for the winter season ahead.